Global LEO Constellations Based on Nano-Satellites/CubeSats

Miniaturization, standardization and high-level integration, which led to large price reduction and commoditization of so many of the devices that are being used every day, has not skipped the satellite world. Nano/Microsatellites and CubeSats are common names to the new generation of miniature satellites. Those are constructed of standard small cube modules and are light weight. Total construction, launch, and operation costs are by 2-3 orders of magnitudes lower than a conventional communications satellite. The cost of the payload is also reduced significantly, thanks to the high level of integration applied to the electronically steered antenna, RF circuits and onboard processing as well as advanced modern chips and efficient air interface based on beam hopping techniques and low power waveforms.

This post presents the basic architecture and main components of an LEO constellation based on Micro-Satellites. In addition, the performance and economics of the system are analyzed and presented.

The simulation analysis demonstrates that such a system will apply to a wide range of markets and use cases, including fixed and mobile broadband connectivity, Connected cars, and IoT/M2M for both fixed and mobile terminals. It also supports a significant reduction of the cost of Gbps/Year over existing GEO and future LEO systems. To make LEO communication attractive, lower cost User Terminals (CPEs) and Gateway equipment will be presented as well.

The system as a whole offers a low-cost alternative to existing high-end solutions, and as such, it can be defined as a disruptive technology providing a low entry threshold to the market. However, the system or part of it can also be considered as a complementary technology supporting an existing GEO/MEO fleet, by providing additional capacity coverage, coverage for low latency applications, very short deployment times for special needs, backup solutions for major satellite failures and more.

As a basis of our analysis considers the image below, which illustrates an LEO satellite constellation at 1000km altitude. The constellation is based on 10 planes. In each plane 20 micro-satellites are placed, a total of 200 satellites. This type of constellation and the number of satellites required guarantees ground user terminals operation with minimal elevation of 30 deg. Proper link-budget calculations were made to the analyzed scenario. Some of the final (estimated) results are presented herein. 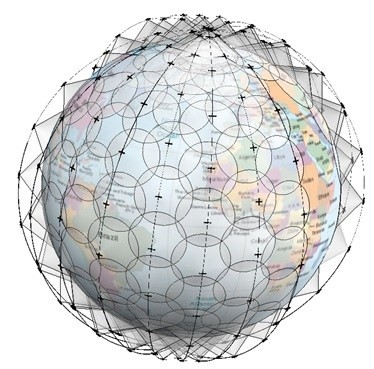 How can we make a difference?

Modern HTS Satellites enable a cost of $100K/Gbps/year. The presented constellation support drop in the cost for Gbps/year to a range of ~$10K/Gbps/Year. The constellation can support a total global capacity of 2.4Tbps (average of 12Gbps/sat). Coupled with SatixFy advanced modem baseband chips and modules, the architecture also enables a low cost phased array antenna user terminal and gateway equipment. Together – the CubeSat-based microsatellite with its associated ground infrastructure represents an entirely new cost structure which is only becoming available now.

The suggested On-Board-Processing (OBP) architecture (read more at our [OBP Blog post]). The figure below shown below enables complete separation between the Gateway (GW or Feeder) links and the USER links. Regeneration of physical layer data is performed in the payload, and the data frames are transferred between the GW link and user links are in different efficiencies (MODCOD). Enabling much higher bit/Hz (up to 6 bits per Hz) on the GW link versus ~0.2 bits/Hz on the user link. The payload architecture also enables the introduction of multiple simultaneous beams generation and processing using fully digital beam forming and steering technology at the payload antenna, which allows the use of the complete available spectrum for each of the multiple beams, based on Beam Hopping techniques. 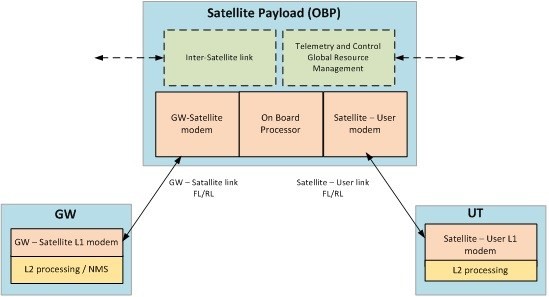 The satellite payload relies on four tilted 256 elements Electronically Steerable Antenna Array (ESAA) and two non-Phased Array antennas for inter-satellite links (ISL). Each payload antenna is capable of transmitting/receiving simultaneously four (4) beams. During operation, both Forward Link (FWL) and Return Link (RTN) between the GW and the satellite payload, use one of the payload’s antennas. All the four antennas are used for the forward User link simultaneously through multi-beam within its coverage area. The beams will hop between different locations on a frame by frame basis. Beam hopping will also be supported by the user terminal as well, based on SatixFy’s baseband chips. 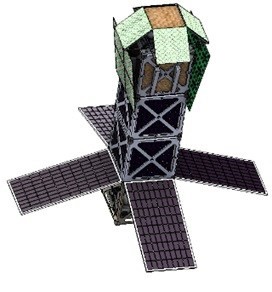 The second part of the payload consists of baseband modems. The transmission from the GW is being received by two SatixFy’s chips each demodulating 1 GHz signal. Each stream is ~6 Gbps (operating at 256 APSK ¾). Each packet is being directed to the right User link modulator. The modulator follows a beam hopping plan with details on the required modulation and antenna directivity pointing.

The User return channels are being demodulated in the payload. The aggregate return link packets are mapped to a higher modcod and transmitted to the GW. The payload supports a low power waveform in which both the baseband and the ESSA power down when there is less or no traffic.

The Satellite is used to host and serve the communication payload for its primary mission. The satellite has a unique location within the constellation and orbits earth in one of the planes. The satellite bus is aimed to provide the payload with the necessary electrical power for proper operation. The figure below depicts the satellite OBP payload design used to accommodate the GW and user links from one hand, as well as two Inter-Satellite Links (ISL). The following section describes the various payload components and their connectivity in more details. 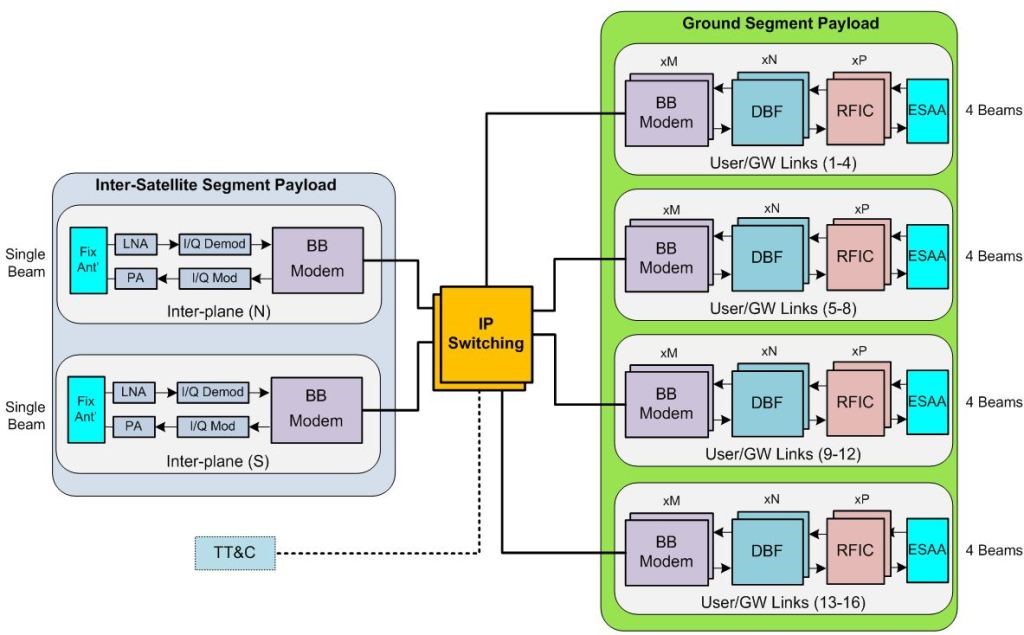 The GW controls and manages the BW allocation of the users and the burst plan. This plan is generated at a central place by the Global Resource Manager and distributed to the GWs and the payload. IP traffic is mapped between the GW link and the user links in a way that enables the packet processor in the OBP to route the traffic to the right beam and customer.

A high throughput Ethernet backbone is required to aggregate, switch and distribute traffic between BB chips (different links), based on the traffic destination. When a GW link is available to the satellite, the GW‑Satellite-CPE link becomes the primary data path. In case a GW link is not available the satellite aggregates/distributes the traffic to/from the CPEs (users-links) to/from the four ISLs links.

This section shall detail more information regarding the Gateway, User and ISL links:

For a satellite to “see” at least one GW at all times, there is a need for 15 GW sites which are spread globally. From each site, there is a need to track ~14 satellites and therefore typically will require more antennas to support lossless handover between rising and setting satellites. ISL, as described in more details above, can support the reduction in the number of GWs but will lead to decrease in the total capacity. GW link includes single carrier of 2 GHz x 6bit/Hz =12 Gbps to one of the payload antennas.

The user link operates at a lower MODCODs than the GW link. The high data rate GW information is being routed according to the destination address via the packet processor. The link budget below demonstrates that a user can transmit a 100 MHz carrier on the uplink using a 1024 elements ESAA antenna.

The user uplink traffic is based on 100 MHz carriers of burst DVB-S2X. DVB-S2X shortest frames are using 16K bits of LDPC blocks. Since there are use cases where shorter frames are required, a set of shorter LDPC blocks are added (i.e., 4K, 2K, 1K) which together with the high symbol rate will enable a short latency.

The transmission and reception will be capable of using DVB-S2X superframe structure (Annex E) so that the utilization of the user beam bandwidth can be maximized by using superframe and Beam Hopping. SatixFy’s SDR ASIC technology is capable of performing both SuperFrame and Frame by Frame Beam Hopping.

The payload may support Inter-satellite links. In this case, the satellite would be able to communicate either in the same plane (inter-plane) of in separate planes (Cross‑plane) and transfer data between satellites before terminating at the GW link. With 15 ground GW sites, each satellite out of the 200 satellites will have line-of-sight to at least one of the GW sites.

There are three possible constellation operations:

Operation with no ISL

In this case, the satellite can provide up to ~12 Gbps (2 carriers each of 6bit/Hz) to its coverage area. Satellites which need to provide less/no capacity will power down to adequate power level.

Such operation enables reduction of the number of GW sites. In addition, it allows a single payload to provide higher throughput as the payload will aggregate the uplink data from the GW and from one or two ISL. Reduction in the number of GW sites will make it necessary to connect some of the satellites through one or more hops in the ISL. This will increase the round trip time. ISL with satellite in the same plane can be implemented with two fixed (not steerable) 1024 elements Antennas. Since the total capacity of each satellite is 18 Gbps and the feeder (GW to Satellite) is 12 Gbps. Additional 6 Gbps can be taken from an ISL when available.

Theoretically, the entire constellation can be fed from a single GW location. However, this kind of operation will increase the latency dramatically, and it will drop the constellation capacity to about 160 Gbps (12 Gbps/sat x 200satellites/15GW). ISL to neighboring plane satellites requires a tracking antenna which can also be implemented with an ESAA. Such a solution will require more power than ISL in the same plane.

Mini/Micro/Nanosatellites are a disruptive technology (which means a low-cost /low-end technology) that can serve as complementary to the GEO/MEO fleet and might one day replace the high-end costly existing technology.

In this blog post, we explain the new technological advances in satellites payloads. High level of integration of the payload functions such as electronically steered phased-array antennas (ESAA) coupled with advanced modem functionalities can be combined to facilitate a new generation of LEO constellations satellite networks. These networks offer a cost structure which is a scale of magnitude lower than existing satellites, enabling the launch of new services such as connected cars, IoT/M2M, and broadband services at very competitive service costs.