Beam Hopping – How to Make it Possible (Part 1)

This post is the first in a three parts series. The following two parts will be published next. See part 2 and part 3 (links)

Part 3 – Discusses the SatixFy beam-hopping ecosystem and how we deal with resource management aspect.

The introduction of high-throughput satellites (HTS), with multi-spot beams, provides a significant increase in available capacity. HTS brings about new challenges in optimally utilizing the satellite bandwidth, beam and power resources in cases of varying demand between beams, non-uniform traffic patterns during the day (peak hours) and the effect of multiple time zones in traffic load distribution. Current and future satellites introduce flexible techniques, such as flexible power allocation, flexible bandwidth allocation and beam hopping to cope with those challenges.

Beam hopping, as one of the most flexible techniques, was shown to increase the effectiveness of the usage of the scarce satellite resources for non-uniform demand density, both in terms of bandwidth and power. However, implementation of beam hopping, both from terminal availability (mainly chipsets) and from the operational point of view requires a paradigm shift. 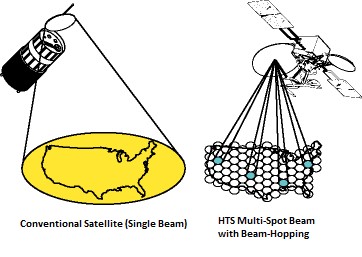 To overcome this issue, activity has been recently initiated within ETSI to develop a standard protocol between satellite service providers’ network management systems (NMS) and satellite operators’ telemetry and control (TT&C) systems to enable better adaptation of the demand for flexible satellite resources. A description of this activity will be given in the post.

To increase the confidence of the satellite communication market, and to enable research development and testing of the technology SatixFy is developing a test bed for a beam hopping ground segment. A short description of the Beam Hopping Emulator (test bed) is given as well.

The goal of this post is to discuss the current state of the art, demonstrate the capabilities of systems based on SatixFy chipsets, discuss the standardization process and explain the possible uses of a Beam Hopping Emulator.

Terabits satellites have been a focus of interest for the next generation of satellite communications. Payload flexibility is an essential requirement for Terabits multi-beam satellites to optimize the utilization of the satellite resources and maximize its capacity under the constraints of varying traffic demand.

Beam-hopping in which the transmission channel hops among several beams provides the payload with flexibility in the time domain. It allows the satellite to serve a multitude of beams, optimizing its resources to the changing demand. Research and analysis on the performance of beam hopping systems are being performed in the recent years showing the advantage of the technique. 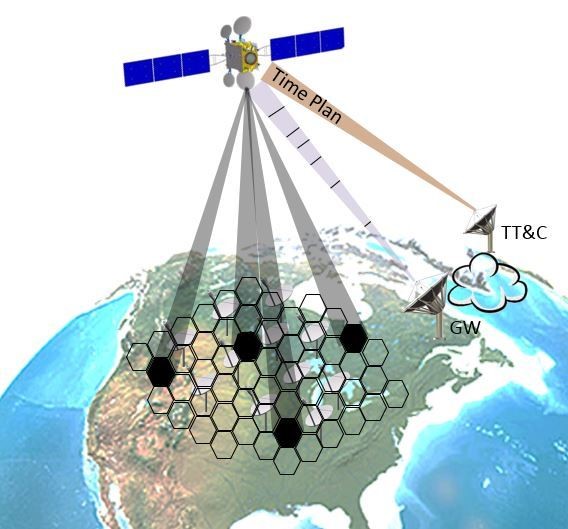 However, implementation of beam-hopping based systems still faces some obstacles:

With Satixfy’s SX-3000 family of products, we present a VLSI ASIC solution capable of operation within a beam-hopping environment, both as the processing heart of a terminal and as a building block of a hub. The chip answers the demand for low-cost ground equipment for beam-hopping systems.

To increase the confidence of satellite operators and service providers in the beam-hopping solution, SatixFy is developing Beam Hopping Emulator, which can be used to test various scenarios, parameters, and options.

To enable a multivendor open market, similar to the market structure existing today in the field, there is a need for an agreed upon protocol between service providers and satellite operator to be able to convey the demand requirements on the one hand and the transmission plan on the other. Activity in that regard has started in ETSI recently. 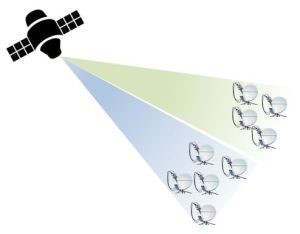 The post presents a definition for a beam hopping systems and summarize its expected gain. In part 2 we will elaborate on the technical details of the structure and means to implement it, both regarding payload and from the point of view of the terminal. we will also describe the activities taken in ETSI to develop a protocol for communication between a satellite operator and service providers such that a flexible beam hopping system can be implemented in a multivendor multi-operator environment.

The term beam hopping refers to a satellite, equipped with high gain antennas, or an antenna array each illuminating a limited area on the ground. In this post, we see, for the sake of simplicity to the forward link transmission (downlink) direction and we use the following terminology:

The advantages of beam hopping can be summarized as follows:

The real advantages of beam hopping can be attained when the demand in various cells is uneven in space and time. Some cells might be heavily loaded while others might be very slightly loaded, depending on geography and population density. The total demand and its distribution also change as a function of the time-of-day, time-of-year and during the lifetime of the satellite. Having a constant transmission power for all the beams would certainly be sub-optimal, it may lead to either over-design of the satellite or to a design that would result in cells in which the demand is not met together with cells where the available capacity is under-utilized (excess capacity). So, in order to optimize the satellite resources, the satellite has to have flexibility in the allocation of the resources to beams.

Resource allocation flexibility can be provided in the power domain, allocating different transmission power per beam, in the frequency domain, wherein the bandwidth allocated to each beam varies according to demand, and in the time-domain, in which different dwell time is allocated per beam. From a theoretical point of view, allocation in time and frequency are dual to each other. 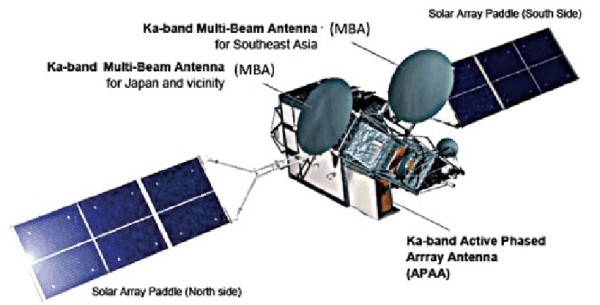 The study is very comprehensive. The analyses performed were made against varying demand scenarios over Europe in the years 2010-2020. It can be conjectured that for areas in which the demand differences among cells are more extreme (e.g. areas covering highly populated regions, next to vast desert or ocean areas, typical to continents like America, Africa or Australia) the advantage of beam hopping would have been more pronounced. Also, the evolution of technology in the last few years, i.e., Phased Array Antennas, On-Board-Processing (OBP), and higher speed Baseband chips, enable additional significant improvement in capacity.

Next Part – Beam Hopping Technical Aspects will be release soon…